Finally, a true clash of the titans! 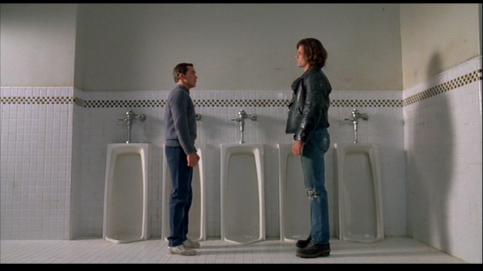 Can’t you just smell the epicness??

Three O’Clock High is a bit of a forgotten film from the 80s, unknown even to many of the people who tend to like this sort of thing (I hadn’t even heard of it until less than a year of ago). Watching it now, it’s easy to see why, tragic though that might be, it fell to the cultural wayside. It’s an uneven movie, aiming as it does for an odd balance of broad farce, random weirdness, and straightforward drama… but what works about it really does work quite well, and the rest of it is inoffensively silly enough. Not a great movie by any means, but one that’s hard not to like, considering the creativity and effort that’s bursting awkwardly from its seams. (It also didn’t help the movie’s box office that it had no major stars of the time in it. Even the cast members who went on to become famous are largely on the sidelines.) It’s certainly more memorable than at least half of John Hughes’ overrated angst-fests.

Bottom line, the film has personality. That counts for a lot.

There’s some small but pivotal intervention by others, and a brief use of brass knuckles.

The Setup: Due to a misunderstanding in the men’s room (er, not what it sounds like), Jerry becomes the target of Buddy’s rage, and the new student informs him that at the end of the school day, the two of them will have a fight.

Given Revell’s reputation, that sounds more like an execution, and word of the upcoming duel spreads, building to a fever pitch amongst the student body. All Jerry’s attempts to get out of the fight fail or backfire until, using money he purloined from his campus job, Jerry bribes Buddy to leave him alone for several hundred dollars. Buddy agrees, but regards Jerry with open and genuine disgust for his cowardice. Fittingly, the blow to his dignity puts our hero through far more turmoil than the threat of physical violence did.

He goes to be sad about it in the bathroom. Lotta bathroom stuff in this movie.

After some soul-searching, Jerry decides it’s time to face the music. He re-confronts Buddy, demanding his money back and telling him the fight’s back on. The bully demurs at first, but finally grants him his wish. As the school day winds to a close, Jerry strides purposefully to their battlefield in the parking lot, soon finding himself surrounded by an almost comically large crowd of frenzied, cheering students. Siemaszko’s body language here is impressive: despite his diminutive size and buttoned-down appearance, he actually comes off like a bit of a badass, charged with a renewed sense of purpose. He carries himself in a subtle way: not cocky and assuming he’s going to win, just determined to face his destiny like a man.

As with the characterization of Buddy, the lack of subversion here is refreshing. There are no “higher lessons” imparted here where the characters learn that violence isn’t the answer or some goofy shit like that; the movie promises you a fight and it GIVES you a fight. It’s a bit of a throwback– fitting, since it’s openly modeled on/a satire of classic Westerns.

The Fight: How does a guy like Jerry beat a guy like Buddy? Well, a straight victory was never going to happen. Our hero displays some canniness & luck, but he also gets by with a little from his friends.

The first punch thrown doesn’t actually hit either of the two combatants. Just as they square off, they’re interrupted by the school’s principal, confident in his ability to put a stop to such shenanigans.

His confidence is… misplaced.

But Buddy doesn’t give a crap for authority, and when he touches Buddy’s arm to pull him away, Buddy decks him, and tells a shocked Jerry it’s his turn. This actually makes Jerry’s newfound confidence waver a bit, which Buddy takes advantage of by pushing him fiercely into the side of a van.

Fortunately, Mitchell gets a breather from the intervention of his not-girlfriend, a goofy hippie named Franny. Unfortunately, she’s little more than an irritation to the huge bully.

But what an irritation she is.

Revell gives her a relatively chivalrous dismissal in the form of a harsh shove to the face. Franny’s mistreatment stirs Jerry a bit, enough to rise, taunt Buddy and rush back into battle.

Jerry gets a punch to the throat for his trouble, but while he’s down he pays the bully back with a nasty-looking kick to the shin. He follows up with the questionable tactic of jumping on Buddy’s back.

After some frantic spinning around, Buddy tosses Jerry overhead and he lands on a car hood. The school’s maniacal security guard (played by a hammy Mitch Pileggi, who would later be better known as Skinner from The X-Files) also tries to break things up, but even he falls to a single blow from Buddy. Meanwhile, Jerry stands again to give some more trash talk, and even gets a straight punch to Buddy’s nose that surprises both of them.

Unfortunately it’s not enough to bring him down, and the villain retaliates with a huuuuuuge roundhouse that leaves Jerry slumped on the ground in a helpless daze. Seeing this as the proper time to deliver the Fatality, Buddy gets out his brass knuckles. As he marches slowly over to Jerry, the director pulls a common but neat trick where the camera focuses first on the brass knuckles themselves, then they go out of focus as we see Jerry’s reaction to them.

Buddy hoists Jerry up and rears back his other hand. But just before he can deliver the final blow, he’s interrupted by a flying tackle from Vincent, Jerry’s best friend who he’d had a falling out with earlier in the day. While the scrawny Vincent tries to redeem himself by raining mostly ineffective blows down on Buddy, Jerry’s younger sister spies the dropped knuckles and brings them to her tormented sibling.

Digging into his last reserves of strength, the battered Jerry rises yet again and faces off against Buddy, who had just downed Vincent with a knee to the crotch. The crowd senses this will be the final showdown, and their cheering reaches a fever pitch. Individual characters are shown all urging the hero to triumph, with even the principal awakening from his stupor to deliver an uncharacteristic (and hilarious), “Don’t f–k this up, Mitchell!”

Buddy, finally wary of Jerry’s tenacity, lunges in with a punch, which Jerry barely dodges. Then, in super slow-motion, Jerry channels all of his might into one brass-enhanced blow to Buddy’s sneering mug. The bully weebles, wobbles, and finally falls down.

You’d think after losing to a guy like Jerry, for his next adversary he’d pick somebody besides Arnold Schwarzenegger.

Jerry wins, and the crowd surges around him as the triumphant hero.

Afterward, in order to show their appreciation for Jerry and make up for the “robbery” he’d staged to get the bribe money, the students all show up at Jerry’s campus store and “purchase” standard printer paper at a dollar per sheet, effectively donating a huge sum of money to him. Finally, Buddy himself shoves his way to the store’s counter, and looks Jerry in the eye as he personally returns the wad of money the hero had given him earlier. He regards Jerry with a look that’s not quite a smile, just enough of a softening of his face to indicate his well-earned respect. Again, this isn’t an after-school special; the bully doesn’t suddenly turn good and become Jerry’s pal, but he is man enough to admit defeat.

As silly and uneven as the movie is, this stirring and fairly straightforward fight is oddly fitting for it. The staging actually makes Jerry’s eventual victory seems plausible, and while the actual “fight” fighting is pretty thin, the whole thing unfolds quite thrillingly regardless. Giving this absurd & petty confrontation an un-ironic bombast actually serves to make the story more honest, perfectly conveying the outsized emotional lens through which teenagers live their lives; everything feels so epic and important you’re in high school. In fact, in that way it’s a bit of a precursor to Joss Whedon’s approach to Buffy.

Coming Attractions: “MORE superheroes? Jeez. Will you at least pick something that everyone likes this time?”