Today: a reminder that they can’t all be winners. 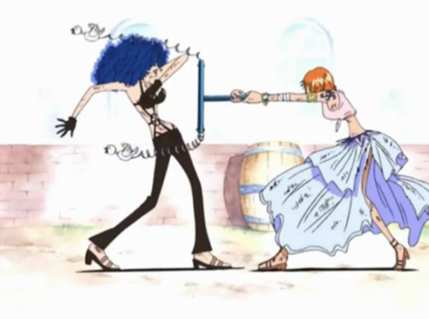 This is actually more silly than it looks.

The Setup: The #1 team encounters Zoro and Nami together on the streets of Alabasta, and at first pursue only Nami, correctly identifying her as the weaker threat which should be eliminated first. Zoro intercedes and squares off against Mr. 1, leaving Miss Doublefinger to deal with Nami.

The navigator promptly runs & hides, at which point we get the (convenient) flashback about the creation of the Clima-Tact. Drawing the weapon, Nami finds the courage to stand her ground… just in time for her opponent to stab her through the wall she’d been leaning against.

Fortunately it’s only through the shoulder (that happens a lot in this show), so Nami’s alive when Miss DF cuts her way through the wall and introduces herself. Time to fight!

The Fight: Nami quickly tries to fight back with some of the Clima-Tact’s features (most of them done using different configurations of the sections), but finds them to be, shall we say, less than useful. First it fires a small smoke cloud which doves fly out of. Then she shapes it like a gun, which only produces a bouquet of flowers.

Sheesh, even Piers Morgan wouldn’t be threatened by this.

Later it produces a cartoon boxing glove which doesn’t even reach all the way to its target, and much later it will shoot out small streams of water like a sprinkler (which Nami will actually use to her advantage). Throughout, Miss Doublefinger looks on at Nami with a mixture of pity and confusion.

In fact, this forms a loose pattern for the two’s duel: Nami will be chased, be cornered/fight back after reading & remembering more about the Clima-Tact, her opponent will stand by while Nami uses the weapon in a way that is varying degrees of ineffectual, and the cycle will repeat, with Nami suffering minor injuries along the way.

There are some very neat iterations of Miss DF’s powers. At first she just uses them in a fairly straightforward manner, such as turning her fingers into elongated daggers:

But as the fight wears on the villain deploys her thorny nature in several wild & inventive ways. She transforms other body parts (including her nose and the tips of her bra) into sharp points as well, she forms spikes out of her heels so that she can walk upside down on the underside of an archway, she turns her entire hair into a bed of needles, and at one point she even becomes one big giant ball of spikes and rolls after Nami like Sonic the Hedgehog. 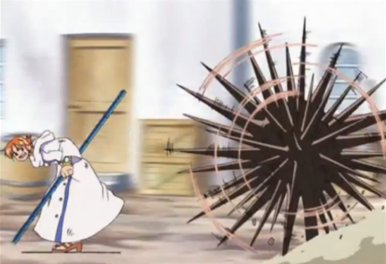 Smack that bitch and takes her rings

Later on, she displays her own form of Beast Mode when she injects her own arms with her needle fingers, which somehow turns her into super-buff, spiky clubs.

For her part, Nami displays some ingenuity, both with and without her impossible weapon. She wins a little respect from her adversary by getting Paula to chase her through a window, then rips off her own cloak and tangles the villain up in it (while still in ball form) to buy herself some more time. She’s soon able to use the Clima-Tact to create a wind attack which fires off one portion like a boomerang, knocking the villain back a bit.

Eventually Nami comes to realize that the true power of the odd staff is how it can generate small spheres of heat, cold, and electricity… and due to the odd science rules that govern shounen anime, have the correct combinations of these otherwise harmless discharges add up to devastating effects. She can also create a mirage version of herself (which she uses to briefly trick Miss DF into thinking she’s been killed) by causing light refractions from the difference in temperatures. 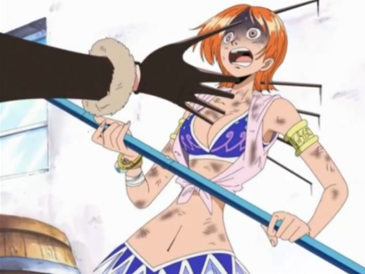 Finally, Nami reads up on the Clima-Tact’s ultimate movie, a one-time only attack called the “Tornado Tenpo.” Since she only has the one chance to use it, she makes sure to create an opening. She creates a cloud by making a bunch of cold spheres, then merging them with hot spheres which have soaked up water from her sprinkler move, and when the cloud gets big enough, it close in on Miss Doublefinger and Nami juices it with some electricity.

Paula is hurt, but even more mad. She charges through what turns out to be another mirage, and Nami appears from behind, sarcastically telling her what the “forecast” is. However, she has trouble standing due to her wounds, but in the battle’s most inspiring moment, Nami thinks back on the suffering Vivi has endured thanks to Baroque Works, and knows she has to hold herself together for her friend’s sake. She even explicitly says that her pain is nothing compared to Vivi’s; this is the kind of outsized emotional bombast this genre is so well-suited for.

She even powers through getting impaled in the foot after Miss DF tries her urchin-head attack again. She uses the leverage to get close to her foe, then opens the Clima-Tact right in her face to execute the Tenpo. Surprising both of them, at first it only shoots out a pair of clockwork doves. Nami is enraged that it appears to be another joke, but shortly after the little birds wind their way around the target’s body.

Then the “T” bar on the end begins spinning rapidly, and with incredible centrifugal force, propels Miss Doublefinger through three buildings, knocking her out and then some.

Well, this is proof that even the best of the best isn’t always made up of 100% winners. It’s not offensively bad or anything– at about an episode and a half like its predecessors, it stops well short of outstaying its welcome– but it’s hard to love, too, especially sandwiched in amongst much better material.

Cool powers or not, Miss Doublefinger doesn’t present as great a threat as one would think, given her rank in Baroque Works. She’s conspicuously generous in waiting to let Nami pull off all sorts of complicated maneuvers, and after sustaining mostly mild damage throughout the battle, she ends up falling to an attack that seems fairly tame by One Piece standards.

The Clima-Tact is sort of an interesting idea, but it’s not handled well here (it will play out better later in the series). It’s always tough to know where to draw the line on believability, but for my money, the idea that it can generate a bunch of small charged blasts is on one side of that line, and the idea that it is somehow hiding several live animals and other party gags is on the other. To say nothing of the idea that Usopp would have designed the weapon primarily with amusing magic tricks in mind, or that Nami wouldn’t have studied & practiced with the Clima-Tact before now, given how important she made it seem to her in the flashback.

Credit is due for providing yet another left turn in terms of the nature of combat, compared to the more directing fighting in most of the other battles, and even the more explosive and convoluted maneuvers in the Southeast Gate throwdown. Plus it’s nice to finally give Nami her first big win.

Still, with the actual fighting too unevenly spaced and the silly plot mechanics, this is easily the weakest of a great bunch.

[Also, this was probably the beginning of the series’ unfortunate trend of oversexualizing Nami; around this time (if not this actual battle, specifically right when Nami rips her cloak off), the artists started to draw her with Jessica Rabbit’s proportions but far less modesty. So there’s that.]