In which two bros can’t just hug it out.

The Setup: In what is possibly the most ridiculous head-slappers of this movie, Harry got freaking amnesia from the injuries he suffered at the end of his last fight. Amnesia. Is there any more clear sign of screenwriters just transparently giving up at finding a way to put a character in narrative “time-out” until it’s convenient? Gah. Specifically, a form of his amnesia that transported him mentally back to around 19 or so, before his life started turning to crap. (Judging from some of Franco’s performance, though, he actually regressed all the way back to kindergarten.) This plot device wears off just after Innocent Harry had an inadvertently romantic moment with a vulnerable Mary Jane, and Osborn decides to seize on this as his chance to hurt Peter on a personal level before baiting him into another confrontation.

Harry blackmails MJ by promising to kill Peter (you know, that thing he’s determined to do anyway) if she doesn’t pretend to dump him for good. After the staged breakup, Harry rubs salt in the wound by violating the Bro Code and telling Peter he’s been having an affair with her. Peter, ever the genius, realizes soon enough that Harry has regained his memory, and goes off to confront him at his home as he melodramatically mixes cocktails in anticipation. 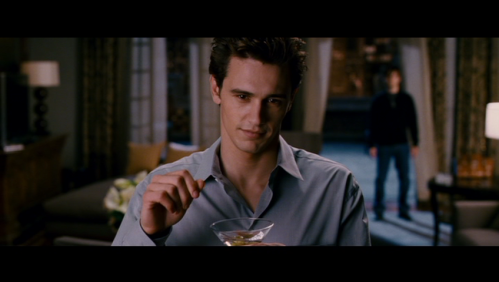 Weird how so many people don’t take this movie seriously.

It should be noted that while Peter, shocked at what his new “outfit” was making him do, had taken it off for a while and made an effort to straighten his life out. But when he goes to face Harry, he deliberately puts the suit back on, wanting it to enable his negative behavior.

Also note even though Peter is wearing most of his black suit underneath civilian clothes and Harry’s packing a surprise up his sleeve, both fighters are essentially out of costume. In fact, both times these two fight in the movie, they’re unmasked. Hence the title entry using their real names rather than their alter egos; this isn’t superhero vs supervillain, it’s two “friends” settling old scores.

The Fight: After some more taunting from Harry (he even lifts Sean Bean’s pervy line from Goldeneye about MJ tasting “like strawberries”), Peter goes straight to fisticuffs. He gets in a few good licks, but his eyes open wide when he gets a surprise stab to the gut from his old pal. 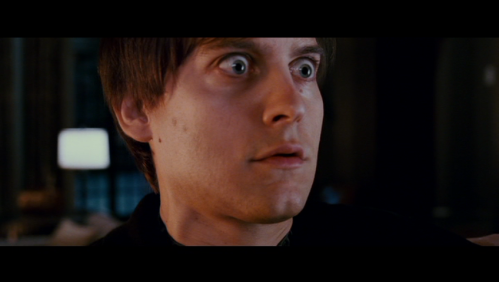 “I just realized I had sex with Iron Man in Wonder Boys!”

The dagger doesn’t go very deep before Peter slowly pushes Harry’s hand away, but just as the knife is removed from play, Osborn swings at him with some of those forearm claws concealed underneath his dress shirt. He’d been expecting this confrontation.

The weapon is pretty effective at pushing Parker back for a little while, and he even gets a close call when he barely stops it from going right into his eyeball. He catches a lucky break when an errant swing lodges in the wall, allowing the hero to break the blades off with a blow to Harry’s arm.

The two continue to have a pretty solid, mutual beatdown, knocking each other into walls and through windows. The taunts make it even better. After one nasty blow, Osborn asks “How ya like that, Spidey?” to which Spidey replies “That all ya got?” Even better is Harry, when it’s his turn on the ground, growls “I used to protect you in high school, now I’m gonna kick your little ass!” which elicits a delightfully sarcastic “ooooh!” from Peter. It’s not exactly Stan Lee, but it’s appropriately schoolyard.

He gives good Dafoe Face, too

For this portion of the fight, there’s no webs, no gadgets, no flying and no swinging. If not for the superhuman strength on display and the extraordinary abuse their bodies are taking, you’d swear this was just a regular fight between two normal people. And that was surely a conscious choice: by keeping the brawl relatively simple, Raimi not only provides variety from the movie’s more wild encounters, but he makes it more personal for the audience.

Eventually, Peter tackles Harry through the mirror that’s actually the entrance to Osborn’s secret Goblin lab. Harry immediately grabs that green sword from its place and starts swinging away again. Peter dodges it all skillfully enough so that it instead ends up hitting pretty much everything else in the lab, including the spare glider that had been idling in the center.

Freed from its tether, the glider goes spinning uncontrollably around the room as the fight rages on. Sensing an opportunity, Peter does a nifty spider move where he grabs Harry by the lapels and pulls them both to the ground. When the board comes around again, Peter throws him into its path. He gets smacked in the face and goes flying into a rack of pumpkin bombs.

Remarkably, none of them go off, but Harry’s pretty hurt anyway. He asks if Peter will kill him like he did Norman, but the wayward hero expresses disgust rather than pleading for understanding. He twists the knife by telling Harry his father despised and was embarrassed by him, playing on his friend’s worst fears. Especially jarring is how he finishes it with a “what? You gonna cry?” like he’s a grade school bully.

Harry tries to rise to continue to fight, but a swift chop to the neck puts him right back down, and Peter storms off like Harry is utterly beneath him. Osborn tries to get the last word in by throwing one of the grenades at his old friend, but Peter side-steps the projectile, snags it with a web and returns it to sender. 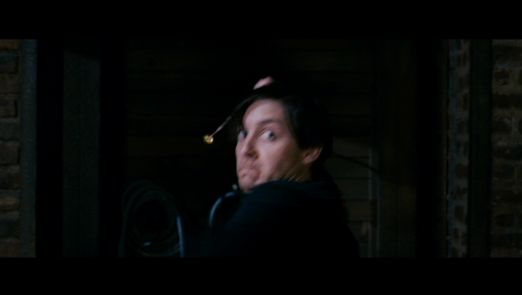 Blessed with no such reflexes, Harry can’t get out of the way in time, and gets caught up in a small explosion. Peter doesn’t even stick around to see if he lived.

This one’s probably my favorite. It’s just the right mix of genuinely fun while still being legitimately off-putting (vis a vis Peter’s behavior), and the more humble choreography is both a bold choice and a welcome change of pace. Being able to see the actors’ faces and know that they’re not being swapped out with a bunch of digital pixels helps to draw you in closer to what’s a very intimate conflict. Granted, if every fight in the franchise were like this, it wouldn’t really feel like Spider-Man, but it’s nice to see Spider-Man branch out a bit every now and then.

The music is serviceable if not spectacular, a dark & playful little tune that revs up appropriately with the action. If there’s any flaw it’s that it ends too soon after they get to the lab, and the blow that knocks Harry into the wall and effectively ends the fight, while surely painful, seems a bit anticlimactic for what had come before. But Peter’s cruel taunts and the too-cool bomb throw back help put an appropriate punctuation mark on the encounter.

Coming Attractions: Spider-Man might be tough, but Venom is Topher.

At least he’s not Kutcher.