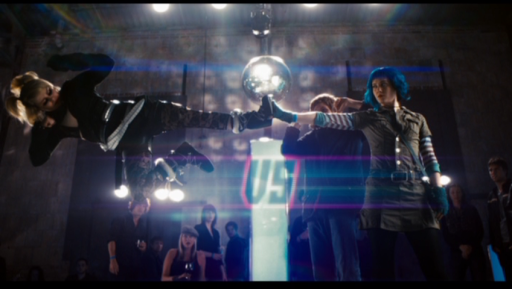 Always fighting over a boy. Sorta.

The Setup: At an after-party in a swanky night club, Scott’s relationship with Ramona is beginning to clearly deteriorate due to his insecurities regarding her past romantic history. They verbally jab at each other for a while, and Scott asks why Ramona keeps correcting his description of the League to the gender-neutral “exes” instead of “ex-boyfriends” as he’d repeatedly phrased it. But before she can answer, the explanation kicks him in the back of the head.

He gets up, assesses the situation, and puts it together.

This anatomical depiction of the male brain is the most realistic thing in this movie.

You know what that means.

The Fight: As Ramona starts to explain, Roxy gets miffed at being reduced to a “phase” and decides to take it out on Scott, winding up a big spin kick… which gets blocked, rather effortlessly, by Ramona.

Though Scott will later vocalize his reluctance to fight a woman (“they’re soft!” he whines), Ramona’s motivation here seems mainly to be about finally being proactive in defeating her past. Snarling in defiance, Roxy calls Ramona a “has-bian” which is hilarious, and takes out her chain sword. Ramona prepares her own attitude-adjuster. 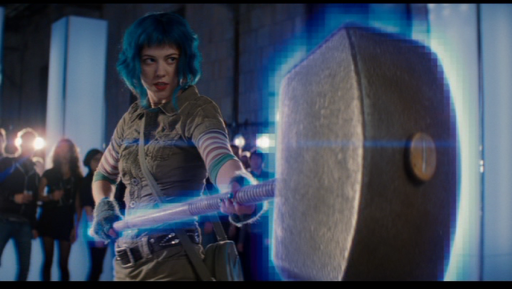 The two have the most complex battle in the movie yet, with some really inventive staging to match Ramona’s slower, bludgeoning weapon against Roxy’s longer, faster, cutting one. There are some neat acrobatic tricks & flips, though everything stays much more local than the high-flying escapades of the Patel duel. Neither one gains much of an edge against the other, though Ramona seems to be the more dominant fighter.

They break a lot of surroundings until Roxy is able to use her whip to seize Ramona’s hammer and send it out the window. But the villain gets too caught up in celebrating her accomplishment to defend against a brutal axe kick from her ex-lover, putting Bland to the ground.

After some taunting, Roxy insists that this is “a League game” meaning that Scott has to be the one to defeat her (it’s unclear what will happen if he isn’t. These rules are being unilaterally invented & imposed by one side of the conflict). So, getting by on a technicality, Ramona stands behind Scott and manipulates his limbs to use him as a fighting dummy.

It looks better than this in practice, I promise.

The impromptu solution actually works pretty well and Roxy gets beaten back, until she employs her teleporting powers again and BAMFs right in-between the couple, separating them. She then punches the vulnerable Pilgrim into the ceiling, and after he falls back down she tries to finish him off with a devastating axe kick of her own. As her heel comes down in slow-motion, Scott & Ramona improbably find the time for a conversation, where she advises him to strike at the “weak point” just behind Roxy’s knee. It’s clear even before Roxy’s moan-heavy reaction that “weak point” is a metaphor for something else. 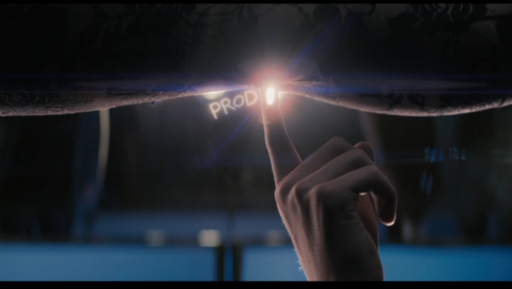 So, yeah. Amidst the ecstatic moaning, Roxy collapses to the ground and explodes in a shower of coins. K.O.

Another fun if not spectacular fight. Throwing Ramona in the mix allows for a much-needed change, as does the addition of some unusual weapons. It’s also quite amusing on the whole and very fast-moving. Though the talented Miss Whitman doesn’t reach the heights of Chris Evans’ Lucas Lee, she’s really quite funny in what could have been an unlikably shrill role if played poorly.

The conclusion of the fight is… unusual. Obviously we all get the nature of the joke, but it seems a bit of a stretch, a double-entendre that’s also literally true. It just makes no sense for that to be the thing that kills her– not just distracts her enough to be finished off but actually kills her– even for this movie’s value of “making sense.” I guess they don’t call it le petit mort for nothing.

Coming Attractions: The conclusion of the movie-length boss rush(more). 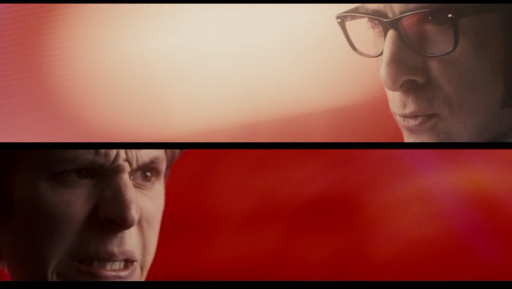 War does funny things to men.