In which Captain America whips it good.

The Setup: Pretty simple. While Scott & Ramona are on another date, they visit the set of a Hollywood movie being filmed nearby (a sly dig at how many movies are filmed in Canada for cost reasons), Scott having been informed of the event by Wallace, who has a crush on the star (and is also on set). As a scene is ready to start, Lucas Lee emerges from his trailer, accompanied by Universal Studios’ famous opening fanfare.

Lee skates over to his marker, and begins filming a tense hostage scene. Unfortunately, and also just as Ramona recognizes the actor as one of her past loves, it’s gradually revealed that the tense threats Lee is shouting are not his script lines, but are directed directly against Scott. Uh oh.

This actually comes later, but whatever

The Fight: It takes way longer than it should for Scott to realize the gravity of the situation; he asks for Lee’s autograph multiple times even as the actor repeatedly punches him, sending him to the pavement. (He’s so star-struck he doesn’t realize he’s getting struck by a star, hyuk hyuk.)

As Pilgrim lies dazed on the ground, Lucas turns briefly to Ramona and delivers what’s probably my favorite line in the movie. With all the forced politeness of a real-life encounter with an ex, and coupled with the hilarious intensity of Evans’ line reading, he asks “Sup? How’s life? He seems nice.” Without waiting for an answer, he picks up Scott’s body and hurls it into the nearby castle being used as the film’s backdrop.

Scott rises unsteadily and gets walloped again. The next time he gets up, he sees who he thinks is Lucas walking away, and pursues only to find that it’s the actor’s stunt double, dressed & coiffed similarly. He gets knocked down again by the stunt man, who’s soon joined by six other similarly dressed stand-ins. Meanwhile, the real Lee chills on the sidelines. 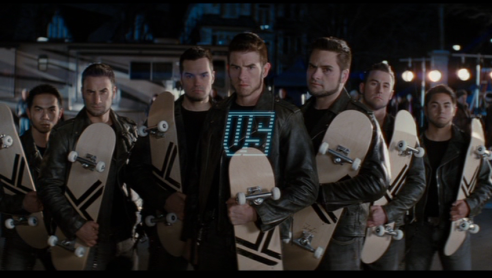 Where’s Stephen Tobolowsky when you need him?

Before he can finish the suggested taunt from Wallace (ever the rabble-rouser) about getting Lucas’ “sloppy seconds,” the stunt crew start in on Scott. Our hero gets in an extended fight with them which is, again, surprisingly complex and well-done, considering the silliness of the situation. Cera cuts quite the incongruously heroic profile, perfectly ducking & blocking as he takes on a wave of fighters coming at him from all angles. He even breaks several weaponized skateboards as he puts down attacker after attacker. It’s completely unrealistic, obviously, and even more so than the ground-based segments of the Patel fight, but it fits in perfectly with the heightened reality of ridiculous action movies Wright is trying to emulate.

Pilgrim’s good performance comes to an end when he’s brained from behind by a skateboard, and when he goes down all the stunt men gang up for a good old fashion kicking bonanza. In real life such group-stompings can result in broken bones, internal bleeding and death, but Wright opts for a take more akin to a Warner Brothers cartoon dog-pile: the camera follows Lucas as he walks off for coffee when he sees our hero is down, but when he comes back, Scott is back up and seemingly unscathed, standing over a pile of defeated foes. Well played.

Responding to Scott’s “you’re needed on the set” taunt, Lee has a face-off with his new rival. There’s a purposely melodramatic, overextended moment as they charge each other, first in split-screen and then in super slow-motion. They leap into the air to attack, but of course Scott loses that contest.

The big kick sends Pilgrim all the way through the fake New York skyline, leading to another funny moment when Lee has to pause his follow-up boasting as he rips through the rest of it in pursuit. They talk briefly, and Lee gets in a sucker-punch after pretending to befriend Scott. His acting is better than ever!

Displaying atypical cunning, Scott is able to goad the cocky Lee into hopping onto his skateboard and doing a grind on the rickety, snow-covered railing along the impossibly long stairs they’re standing by. The ending is edited well, cutting back & forth between Lucas’ speed rapidly reaching absurd levels and Scott’s multiple, sedate “wow”s in reaction. Sure enough, the speed is too much to handle, and Lucas explodes after reaching the bottom. Two down! 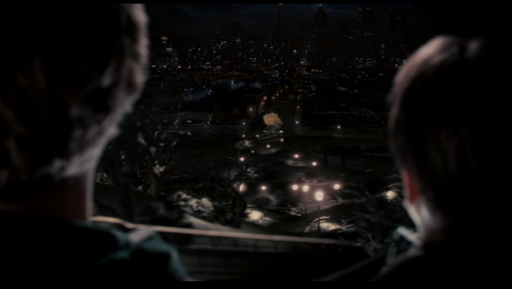 More fun is had here, but it’s disappointing from a fight-scene angle, more so than the last one. Scott can’t even lay a finger on Lee, making for an absurd power imbalance when he’s only two bosses in. He even uses a “cheat,” if a clever one, to make the final kill. This is mitigated somewhat by the long-ish fight with the stunt doubles, which itself was both a pleasant surprise and a gag that arose organically from the scenario.

Another mitigation: the scene is very funny, with Chris Evans doing some absolutely hilarious work in a rare-for-him comedy performance. With his rapid-fire & raspy delivery he actually finds a way to breathe some life into the overplayed caricature of the Egomaniac Movie Star. Evans may be another case of an actor with genuine comedic chops who rarely gets to exercise them thanks to his ridiculously good looks– please, don’t everybody pity him at once. (One of his earliest roles was in Not Another Teen Movie, but even if you did think that was funny, he mostly plays the straight man there.)

So while a nice and highly amusing change-up, it’s not particularly impressive aside from Evans’ performance. But fortunately there’s more to come.

It’s as Roxy as the nose on plain’s face.