As I’ve said umpteen times already, there’s a huge gap between Fight #1 and Fight #2 in Pacific Rim. But that’s not quite true. The much-anticipated giant robot vs giant monster throwdowns are indeed thin on the ground during this period, but amidst the various cliche-ridden shenanigans and melodrama, there’s a handful of honest-to-gosh real physical human fights which aren’t too shabby. It’s of course a few thousand tons shy of the action scale we came for… but it’s well-done enough that I feel bad completely ignoring it.

And yes I usually stick to my self-imposed rules for which movie’s fights I do and do not count, but you know what, it’s my blog, so whatever.

Mako is not terribly impressed with my reasoning.

So consider it a bonus round, a breezy way to burn through the rest of the week before we start on the next subject. “Breeze” being the key word: we’ll do all three at once here.

Handily they all involve our boy Raleigh Beckett, who is a lot more fit and combat-ready than you’d expect for a guy who’s been off feeling sorry for himself the last five years.

Raleigh‘s Opponents: Three Chinese gentlemen, apparently selected by Mako as the best possible potential drift partners. Consistent with Pacific Rim’s treatment of non-main characters, we don’t know these people’s names or really anything else about them.

And not to be the awful white devil who can’t tell Asians apart , but the fact that they’re three young Chinese men with similar heights, builds, clothes and haircuts is a bit confusing considering that a few minutes ago we were briefly introduced to the Wei Tang triplets who pilot Crimson Typhoon; you’d be forgiven for briefly thinking they were sparring with Raleigh for some reason– like, Typhoon was going to give up one of its pilots. That wouldn’t make sense, but a lot of this movie doesn’t make sense. (The triplets are actually part of the small crowd watching the fight, but no one could blame you for not noticing that the first time, either.)

Why there weren’t more than three candidates, I don’t know. Also the tests are done using wooden sticks as kendo swords, which is odd because that’s largely not how jaeger combat works. Each duel works on a point-based system, with every blow or simulated blow counting as a point and the first man to four points the winner. Raleigh calls these a “dialogue” rather than a fight, but they sure look a lot like fights.

The Fight: It moves quickly enough that we immediately get the idea we’re not seeing all of each fight, just the final stroke or so each one. We even hear Mako grumpily calling out each final score, always with Raleigh way ahead. The Chinese guys are fit and skilled, but no match for Beckett– he consistently takes them down with little to no effort, and maintains enough control of each fight that he can do so without hurting them. 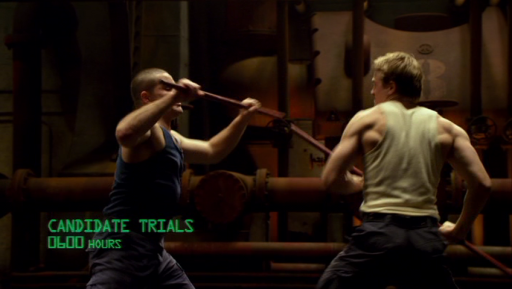 It’s nothing too great, but there’s some fancy footwork here and it’s fun to watch. We get our first glimpse of Raleigh doing his thing outside a jaeger cockpit.

After facing them all down, Raleigh calls out Mako on her attitude, and she replies that if he applied himself better he could have taken them out even faster. This leads, despite some resistance from Pentecost, to Mako entering the ring herself so she can bring our boy down a peg.

After some low-key trash talk/sexual tension, the two have at it.

My wife and I met the same way. No we didn’t.

The Fight: Surprisingly, Mako just stands there coolly when Raleigh darts in with the opening move, not flinching as he stops the stick less than an inch from her head. He interprets it as her being unready, but it’s implied she may have deliberately done it to screw with him. Just as he steps back to begin the next round, she herself darts in and catches him unawares, which is kind of dirty pool if you ask me. (And of course you asked me, that’s why you’re here.)

After another “easy” hit puts Raleigh back in the lead, the two have a longer exchange and she finally gets the better of him. After an even longer back & forth, Raleigh tries switching his fighting stance halfway through but still loses the point to Mako after some up-close tussling and getting flipped over. He does better in the next round, though, making the score all tied up.

The last exchange is the longest of all, with both players ratcheting up the intensity. Raleigh takes a fall but isn’t out, as he’s able to lock up her weapon so they’re in an apparent stalemate. 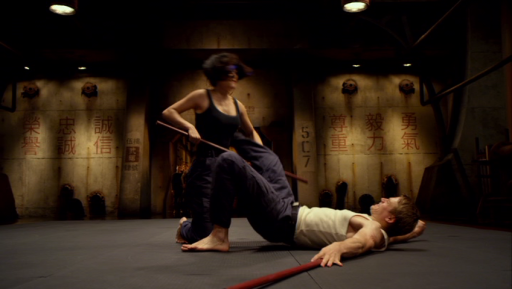 The match gets called off by Pentecost, but Raleigh has learned enough to want Mako as his partner. Which the movie will make happen, albeit by the painfully long route.

After a quick little scene establishing Raleigh’s skill, we get a longer bit that establishes Mako’s own prowess simply by having her show him up, if not too much. The scene doesn’t overly sell that they’re “drift-compatible,” as Raleigh gushes later (again, that whole process is vague), but there is a definite tension between them here in this solid fight with a nice ebb & flow.

Raleigh‘s Opponent: Chuck Hansen, Raleigh’s unnecessarily aggressive rival/bully. This encounter happens just after Raleigh & Mako’s first drifting attempt nearly resulted in Gipsy blowing a hole in Shatterdome. Chuck is understandably upset, but goes way too far in needling the would-be pilots as they wait outside Pentecost’s office for their punishment. Raleigh is able to take the high road at first, but loses it when Chuck calls Mako a bad word. 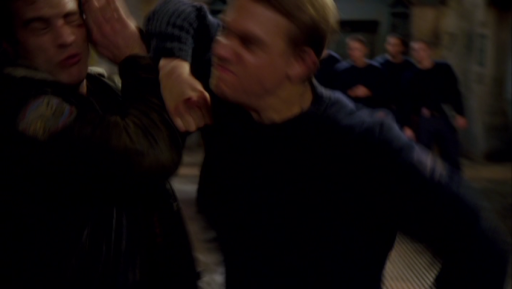 Chuck’s taken by surprise at first but gets into the swing of things pretty well. The pair’s battle is an interesting mixture of unpolished street fighting and complex, MMA-style maneuvers– the latter of which largely come from Raleigh.

Indeed, Beckett is the one who is largely in control of the fight, though Hansen puts up a pretty good effort. They have a nice extended struggle and exchange of blows that culminates in Chuck getting slammed painfully against a wall. He hits hard enough to rupture some piping, which releases a bunch of steam around him as he glares hatefully at Raleigh– an effective if obvious visual metaphor.

Our hero does even better in round two, systematically shutting down Chuck’s assault and even slapping him at one point, apparently just to rub it in. Finally Beckett is able to wrap his legs around one of Chuck’s arms, bringing them both down in a strong hold.

Try not to let someone do this to you.

Thankfully the grown-ups arrive and break things up before Raleigh can break the arm of one of the few remaining jaeger pilots. Gipsy’s pilots are sent to the principal’s office, and Chuck’s left in the hallway with his old man, getting restrained so he doesn’t rush over and get beat up some more.

This image sums up the entirety of these two characters and their relationship with each other.

This is the best of the bunch, being the most technically complicated and emotionally charged. It’s also unusually layered for this movie, since on one level the audience is happy to see Chuck get smacked around, but on another we understand that Raleigh really did screw up big time, and his rival is right to be upset with him. Deep! Well not really. But still very well done.

Grade: A Lot of Fun

“If your blog had a face, I would punch it.”