“Pacific Rim is the ultimate otaku film that all of us had always been waiting for. Who are you, if you are Japanese and won’t watch this?” – Hideo Kojima, master video game creator

If the movie impressed you before, here’s where it really shines. 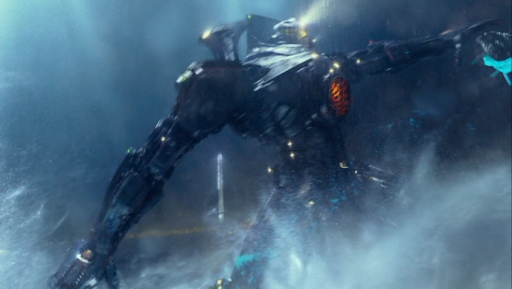 [*The film’s “Pan Pacific Defense Corps” has discontinued the jaeger initiative due to high costs and increasingly unsatisfactory results in the face of ever-stronger kaiju attackers. They’re funding Pentecost for only eight more months as they put their focus instead on an enormous coastal wall that doesn’t even look like it will repel a sustained kaiju attack… and it doesn’t, as we see earlier in the film, but the global bureaucracy charges ahead with the same plan anyway. The staggering political incompetence necessary for this premise is a lot more plausible in light of the real-life U.S. government’s disastrous attempts to overhaul its health care system in late 2013.]

The Setup: As Beckett helpfully (and falsely, according to real-world science) explains, since Gipsy’s power source is a nuclear reactor, it’s “analog” rather than digital, and unaffected by the recent EMP blast. Regardless, it’s been maybe five minutes since that pulse went off– barely enough time for the pilots to get into their flight outfits, never mind the climb into the jaeger, get into their delicate “drift” state, do all the pre-flight checks, hook the machine up to a dozen helicopters, etc. But why let logic get in the way of such a great entrance?

Gipsy gets dropped off pretty close to the kaiju and assumes a ready stance. Raleigh quietly asks Mako if she’s ready for the real thing. She SO is. 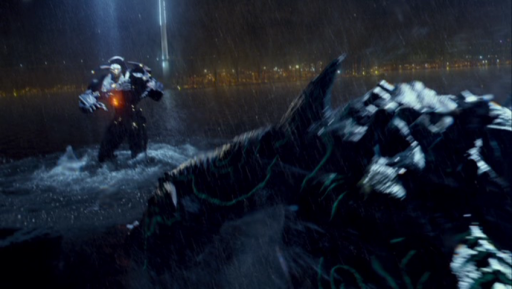 For those who hadn’t given up on Pacific Rim entirely by this point, this is the part where it really wins them over. After not just that long dry spell but the devastating losses in the previous battle, the story is in desperate need of a little turnaround. You can really feel the excitement here, and even before the first punch is thrown the audience understands that although it won’t be easy, our heroes won’t let us down this time: Gipsy Danger’s about to kick some ass.

The Fight: The jaeger judo-dodges around Leatherback’s initial charge and is able to seize the monster from behind. Even though it’s unnecessary because Gipsy is immune to it, the robot still rips the bio-electrical EMP device right off from Leatherback’s, uh, back. From the top of the powered-down Striker Eureka, the pilots cheer on Gipsy, with even the erstwhile dickhead Chuck Hansen enthusiastically urging his rivals to take down the beast.

Leatherback is understandably pissed off at having chunks torn off him, so the kaiju breaks free and turns the tables. Using its advanced size smartly, the monster catches Gipsy in a bear hug. 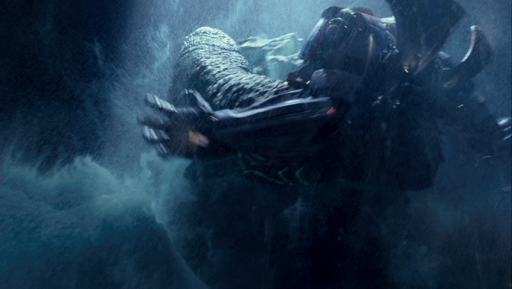 The kaiju then spins around to get momentum and throws Gipsy a good mile or two through the air to the Hong Kong coast, resulting in that long ponderous fall & slide that was spoiled in every single trailer. The jaeger finally comes up in a ready crouch at a dock area, and Leatherback sets foot on land, unleashing a great big giant monster scream apparently as the world’s biggest “come at me bro.”

Both monster and machine charge each other at full speed, with Gipsy’s pilots clearly relishing the thrill (it’s stated earlier in the movie that piloting a jaeger is basically the world’s greatest adrenaline rush). The music builds to a crescendo as they close the distance and Gipsy gets the better of it their simultaneous leap, launching higher up and coming down with a hammer punch on top of Leatherback’s scaly noggin. 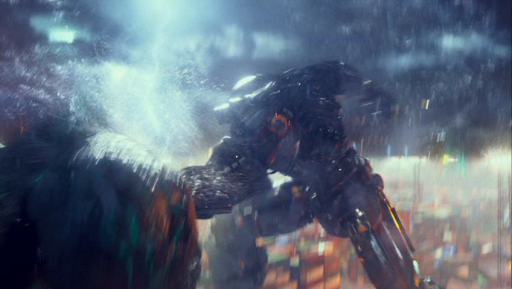 The jaeger hits its foe a few more times (including one with the awesomely impractical Elbow Rocket), but when Leatherback goes down he seizes a piece of control tower and clocks Gipsy with it a few times. Following the kaiju’s example (and maybe also Hulk’s), Gipsy grabs several shipping containers in hand and uses them to smack the enemy around, culminating in a simultaneous smashing to both sides of Leatherback’s face. It’s questionable at best, because surely those shipping containers aren’t made of harder metal than Gipsy’s own “skin,” but again: rule of cool. Del Toro films the blow smartly, slowing down time nearly to a standstill as we see a stunned Leatherback amidst a cloud of suspended debris. 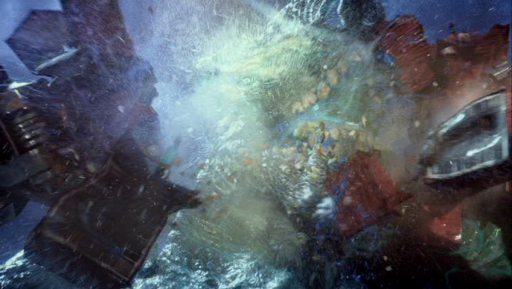 Then everything revs back up and the fight continues. After some more tussling, the kaiju uses his size advantage again and just rushes into Gipsy, steadily pushing the jaeger back. Stuck in close quarters, the pilots decide it’s the best time to whip out the trusty old plasma cannon. 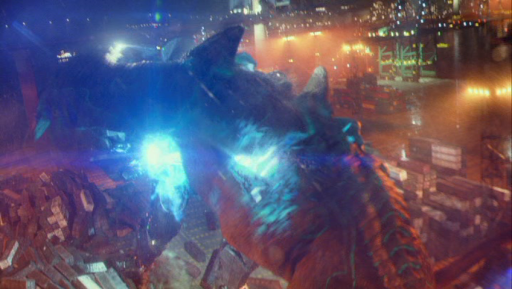 Using the right arm cannon, Mako “empties the clip” per Raleigh’s instruction, tearing increasingly bigger holes in Leatherback’s hide until the monster’s arm falls clean off and it eventually topples, just before it would have pushed Gipsy into the water.

Gipsy starts to walk away, but Raleigh clearly remembers how he assumed Knifehead’s death too soon. Wanting to “check for a pulse” Gipsy revs up the other plasma cannon and blasts the monster several more times, ripping enormous cavities in its chest. Presumably a simpler and more ammunition-efficient way would be to just jump on the monster’s head or something, but this is way more fun. 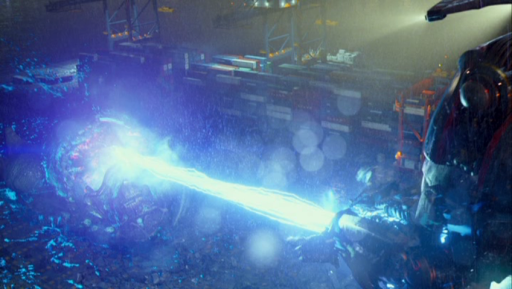 In real war, double-tapping is technically illegal, so good thing the kaiju don’t know about the Geneva Convention.

Satisfied that Leatherback is not merely dead but really most sincerely dead, Gipsy looks to elsewhere in city at its next target: the deadly Otachi.

This is basically non-stop awesome. It fully delivers on the promise of inventive, epic excitement that you went to the movie for. More importantly, as discussed above it comes at just the right time in the narrative, giving the heroes a win they sorely need. And there’s that promise of more to come. 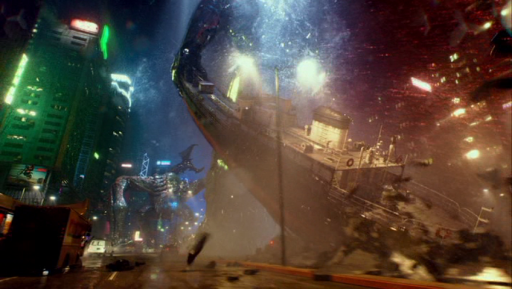