Well look who came crawling back.

I fully admit that the pun makes no sense in this context.

After eleven years that have seen two increasingly bloated sequels, a spectacularly pointless reboot, and a veritable renaissance of other Marvel movies, it’s easy to forget what a breath of fresh air Sam Raimi’s Spider-Man was when it came out. After 2000’s X-Men, shaky as it was, first demonstrated that on-screen comic book superheroics could be legitimately cool, Spidey came along to prove that they could be amazing. If it had flopped, we’d quite likely not be having our multiplexes filled with any Avengers, let alone six of them at once.

It’s got its flaws and in many ways it’s almost quaint, but in 2002 this movie was a revelation. I saw it in the theater three times and who knows how many at home. I adore this movie so much I’d make out with it upside down in the rain. Not coincidentally, it’s positively loaded with fights.

I was tempted to skip at least this early one, since it’s fairly brief and very one-sided. But it’s set up so much like a traditional fight– complete with a crowd of on-lookers chanting “FIGHT, FIGHT, FIGHT!”– and an important building block for the protagonist that I couldn’t help myself.

The Setup: Stumbling through the discovery of his sticky new spider powers, our hero accidentally nailed Flash in the back of the head with a cafeteria tray, spilling food on him. Peter quietly tries to leave the scene of the crime, but Flash stalks him down the hallway.

In a really cool blend of CGI and live-action footage, Raimi gives us a glimpse of the “spider sense” that alerts Peter to immediate dangers and makes him aware of his surroundings; just as Flash’s fist comes crashing in, everything freezes and we get a panoramic tour of the nearby environment. Parker dodges the blow and Flash’s punch leaves a small dent in Peter’s locker, rather than the back of his head. The hero tries to persuade the bully to stand down, but the fight is on. (“I wouldn’t wanna fight me either” is a pretty good comeback, as dim bulb bullies go.)

The Fight: Flash throws a couple strong, swift punches that Peter dodges with ease, thanks to his newfound speed and reflexes. Raimi pulls off another neat trick to convey the hero’s amazing new senses, taking the movie into slow-motion for one punch. While Flash’s arm is still fully extended, Peter (apparently moving at “normal” speed in contrast) has time to move his head to the side and register his surprise. Such a simple yet effective technique.

Peter then dodges a lunging punch by bending his torso all the way backwards while keeping his legs fully planted, like some kind of master gymnast. MJ, having failed to talk her boyfriend down, urges Harry (James Franco! A shame nothing ever became of that promising young lad) to help Peter out, but that quickly proves to be unnecessary, as Harry himself notes.

One of Flash’s friends briefly tries to join the fray, rushing at Peter from behind (no honor with these jocks, huh?), but Peter evades by jumping in the air… and flipping end over end an absurd amount. Seriously, he does it like eight times, it’s ridiculous. It comes off stupid and cartoony even for the superhero genre. Much better effect could have been achieved with something simpler but still impressive, much like the punch-dodging picture above.

But it’s impressive enough for Flash’s friend, who bows out. An enraged Thompson charges again with a series of punches that Peter blocks. He stops the last one by grabbing the bully’s wrist and twisting his arm upright with intimidating strength, then knocking him back about 20 feet with a simple blow to the chest.

You just got Ice Storm’d!

Flash skids into a passing teacher, knocking the man’s tray loose and dumping yet more food over the bully’s face. Ha ha. As a smart epilogue to the tussle, Flash’s friend remarks with genuine disgust that Peter really is a “freak,” which puts a slight damper on what would otherwise be a more jubilant triumph. It’s a clever foreshadowing about how being Spider-Man isn’t all just wish fulfillment and fun.

Except for the miscalculation of the obvious wire work, this is all very good stuff. The hero is of course never in real danger, but it’s always a treat to see a bully get his comeuppance, and this is great character-building for Peter– indeed, the entire day where Peter learns all his new powers really is a marvel of economic storytelling. Raimi just hops from one discovery to the next, covering a range of emotions from confusion to panic to exuberance, and stopping for some nice beats along the way like understated flirting with Mary Jane and, of course, a neat little fight scene. Well done.

[Note that in that reboot from last year, they had their own scene of Peter taking Flash down a peg, but it was this weirdness involving a passive-aggressive game of basketball. Such is the nature of an unnecessary reboot to a series that began within recent memory: the new Spidey film had to zag wherever the original one zigged, hence they had to come up with an alternate approach even though Raimi’s straightforward take on this story beat was just fine.] 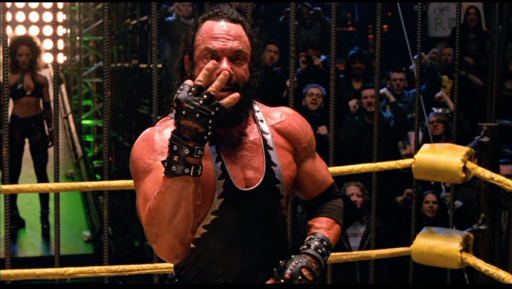