It was very tempting to just let this image serve as the entire review.

The Next Karate Kid is a weird movie. Made five years after the last entry and ten years after the original, it’s really more of a spinoff than a sequel. In fact with a little re-jiggering the script could have been made without Mr. Miyagi (just replace him with another wise old character) and it wouldn’t even have looked like a Karate Kid rip-off, or at least not as much as Sidekicks did. Plus, audiences could see the dopey attempt at edginess behind the whole “Miyagi’s new student is… A GIRL????!!” [cue record scratch] a mile away, even in 1994.

It’s odd in execution as well as in concept. The script takes those aforementioned detours from the franchise yet goes back to the well for its villains in an extremely half-assed way. It’s light on action even by this series’ standards. Hilary Swank was an interesting choice for the lead: she’s pretty but not conventionally so (to the extent that that means anything), and any feminist ground gained by her casting was canceled out by the way she’s arguably used as eye candy, what with the amount of midriff and leg she shows.

But while it’s certainly a weak movie, it is so in a generally inoffensive way. The world saw ads for this movie, said to each other “sounds like a bad idea,” were proven right, and kind of agreed to forget about it. It would be even less-remembered if its star hadn’t gone on to win not one but TWO Oscars. If Karate Kid Part III was hot garbage, this is just cold garbage. I only even saw it myself the one time on cable decades ago, and looked up the relevant scenes online for this review.

4) The Next Karate Kid: Julie vs Ned (and Miyagi vs The Colonel)

The Setup: Ho hum. Frustrated with Julie’s increasing rebelliousnes, Julie’s grandmother turned her over to Mr. Miyagi, an old family friend, in the hope that he’d straighten her out. He does, because he’s awesome.

Along the way, Julie falls for Nice Guy Eric and they go to prom together. Everything is hunky dory until the Alpha Elite do this weird rappelling stunt into the dance and one of them hurts himself, which ticks Eric off and kicks his rivalry with Ned into overdrive: the bully follows the couple and smashes Eric’s windshield with a baseball bat.

Eric is no hothead but he’s looking to end this, so he accepts Ned’s challenge to a fight at the docks– ooh, “the docks.” Was “the construction site” taken? Unfortunately all of the other Alpha Elite (that name gets stupider every time I type it) are also present, and they gang up on Eric, beating him real good. They also set fire to his car, because why not. Colonel Dugan, demonstrating the values that made him one of Uncle Sam’s finest, instructs the other Elite members to finish the job, i.e., kill Eric. Straight-up murder him. Which is something even the Elites are hesitant about. How was this man allowed to instruct minors? I know the teachers’ unions protect some shady SOBs but this is ridiculous.

Anyway, Julie & Miyagi show up and put a stop to this. They attempt to leave peacefully with a bloodied Eric, but Ned keeps harassing Julie. So she bugs Miyagi until he gives permission for her to go give him an attitude adjustment.

The Fight: About as inconsequential as the rest of the film.

Ned, cocky as ever (there’s no way he’d ever lose to a GIRL, haw!), starts things out by standing still and inviting Julie to take a free swing. He barely waits before he tries to cheap shot her, instead, which… seriously? He thinks that will make him look cool in front of his friends? “Hey guys, remember the time I tricked that girl so I could punch her in the face? I’m the man! Up top!”

Anyway, she dodges. And she basically just punks him out from there, over & over. It’s one-sided and not very interesting or exciting in any way, even though she does Sweep The Leg at one point. From the sidelines, Dugan draws upon his deep well of military tactics to advise Ned to “slow down, use your strength.” Which doesn’t work.

What does work, briefly, is when Ned picks up some sand and chucks it in Julie’s eyes. While she’s temporarily blinded, Ned scuffs her up a bit but doesn’t really hurt her (our pal Chozen remains the only villain in this series who’s for real punched a woman). Miyagi tells her to focus and whatnot, so she kneels in a praying position, and when Ned rushes in to kick her she catches his leg, and counters with a slow-mo jump kick that lays him out.

That’s it, Ned’s done. It’s pretty weak all around. There’s no stupidly special “secret technique” she uses to defeat him, just focusing hard enough to fight while blinded (it may well be a callback to some kind of training she had earlier in the movie, I don’t remember/care). That in itself is kind of admirable, even though it is, again, all pretty boring. I can’t really even find any pictures of their throwdown, such a non-impression did it make.

Ned’s beaten, so Dugan tries to rally the other Elites (including a young Walton Goggins in the Bobby-esque role) to pick up the slack, but between Dugan’s revealed insanity and Team Miyagi’s mad skills, they’re all pretty dispirited. So when the Colonel gets rough with Ned, the old man intervenes, and almost as an afterthought we get Miyagi vs Dugan.

“See you at the party, Richter.”

It goes about as well as you’d expect. Dugan keeps lunging in with amateur crap and the old man takes him down with a few gentle-looking counters. Ho hum. Then Miyagi does the “oooh I’m gonna kill you” fake-out again, only this time he blows on his face rather than honking his nose. What a curveball.

So… yeah. Even with the obligatory good master vs bad master bit, it still tweaks the KK formula in some significant ways, with no flamboyant finish, the love interest being more involved, and… a car on fire, I guess. But it’s still very uninspired in pretty much every way.

Recommended Links: A very humorous rundown of The Next Karate Kid’s many peculiarities. 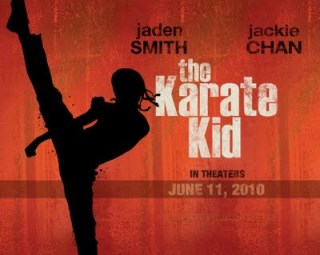 No, Hollywood: screw YOU.