The Setup: Freddy vs Jason was never going to be a great movie, or even a good one. Neither character’s home franchise ever was, after all; the best they achieved was cheesy entertainment (with, occasionally, fleeting moments of greatness). Since it was always going to be crappy, the question was if it was going to be the right kind of crappy. A proper camp tone is hard to strike just right even when you know what you’re doing. It’s even harder to squeeze it in alongside occasional moments of genuine menace even bad horror movies need to have if they’re going to be memorable, and harder still to try to mix the apples & oranges approach of the titular monsters’ respective cinematic legacies.

Above ingredients do not mix well

It is, perhaps, about as good as any Freddy vs Jason film could ever get. Director Ronny Yu often strikes the right balance of cheesy enjoyability, but a lot of it is also just so much polished dullness, with many of the jokes falling flat. And, occasionally, it is really cool.

The plot is a hasty hash of “sure, why not” thinking. In an actually quite well done prologue, we learn that due to his prior defeats and many of his survivors being drugged into dreamless complacency, the youth of Springwood (home of Freddy’s beloved Elm Street) have forgotten Freddy, and without fear he has no strength. (This is not how Freddy’s powers have ever worked before, but like I said, “sure, why not.”) So, he enters the dreams of the slumbering Jason Voorhees, manipulating him into turning his wrath on the teens of Elm Street, reasoning that a renewed bloodbath on Freddy’s home turf will get people talking about him again. Improbably, this actually works.

But Jason keeps killing even after Freddy gets his mojo back, which ticks off the old sweater man. Thanks to both Krueger’s machinations and those of some kids caught in the crossfire, Jason gets hit up with enough tranquilizer to pull him into the dream world. He ends up getting schooled pretty hard by Krueger, as he’s the master of that domain, but the kids concoct yet another plan to lug Jason’s slumbering body off to Camp Crystal Lake, and send one of their own into the dream world to pull Freddy out just in time to square off against an awakened Jason. Again, this somehow works.

Annoying teen Lori (Monica Keena) yanks both herself and Freddy into humdrum reality (specifically into a Crystal Lake cabin, which is on fire for some reason) just as he’s about to kill her. Freddy’s delayed reaction to realizing he’s been plucked out of a realm where he has godlike status is precious, even more so as he turns to discover a very pissed off-looking Jason staring him down (Kirzinger’s imposing body language and the sudden heavy metal tune actually manage to convey the emotions of a masked mute pretty well). They approach each other with the flames adding an appropriate-if-unsubtle touch to the epic nature of their confrontation. 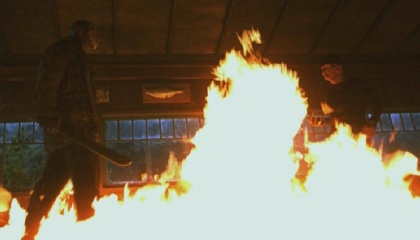 (Wisely, they decided to cut the part where Keena hammily declares “Place your bets!”, though it did appear in the trailer.)

The Fight: After Freddy finishes his cartoonish gulping, he mans up and does what he can to stand against the unstoppable force.

They set a pace early on that keeps up for most of the fight: Freddy is fast & wily, landing lots of small blows, while Jason is a big slow ox who hits with great force but very rarely.

It’s hard to see any other way this could have been blocked out (and lasted more than five seconds), but it’s still objectionable. Jason is often lazily thought of as “slow”– the stereotype is of him lumbering along through the woods after a sprinting co-ed– but his actions can be more properly described not as slow but as deliberate. He’s not stupid, either, at least not when it comes to killing; he’s certainly out-maneuvered smaller prey than Krueger before.

Freddy, for his part, does the lion’s share of work, not just physically but verbally. He grunts and howls with every blow he takes, and laughs triumphantly with nearly every bit of abuse he dishes out. Some of the moves around look like something out of pro-wrestling and cross the line into unacceptably silly, even for a character as hammy as Freddy. And while I’m prepared to believe that Jason’s resistance could be whittled down with lots of small cuts from Freddy’s glove, he wouldn’t be fazed for a second by anybody short of Captain America dropping elbows on him. Englund does what he can with the material and Kirzinger, who is good for most of the movie, is stuck playing the slow dummy.

They’re in the cabin only briefly, with the most notable part being where Freddy tries to kick his foe in the nuts and only ends up hurting himself. Jason then grabs the burned killer and drags him bodily through the wall the long way, then launches him into the open air.

There’s some boring business where the surviving kids try to escape and are confronted by Freddy, who really ought to be worrying about bigger things. That bigger thing presents itself by slicing up the teen who’d remained to stay and distract Freddy, and the fight begins anew. 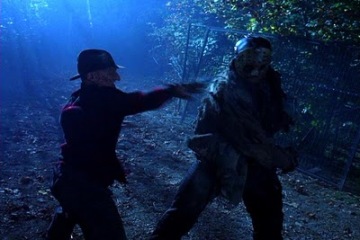 Their dance continues as before, until one good blow sends Freddy near a bunch of oxygen tanks, which are there because, um… the now-abandoned Camp Crystal Lake had a huge scuba diving program? Sure, why not. Freddy figures out quickly that by using his claw to slice the caps off, the compressed oxygen will launch the canister through the air at high-speeds (repeat after me: sure, why not). Krueger than embarks on the weirdest game of impromptu Missile Command ever as Jason slowly stalks toward him. A couple lucky hits send Jason dozens of feet backward into the middle of a small construction site, because of course there’d be a partially-finished building right in the middle of an abandoned summer camp, right next to where they keep all the oxygen tanks for scuba diving. SWN.

Freddy quickly climbs to the top of the scaffolding and drops a whole crapload of long steel rebars on Jason, a couple of which skewer right through him and pin him to the ground. While Jason tries to tackle this problem in slow-motion, Freddy kicks off a dangling… cement mixer, I think?… and sets it ricocheting an absurd number of times, hoping it’ll hit Jason. He also tries to set off a mine cart (?) full of dirt to roll down a ramp at Jason, but it get stuck, and meanwhile Freddy himself gets caught up by the swinging movements of the crane he knocked loose, which brings him right into Jason’s waiting fists. They both get creamed by the freed cart and go flying to the dock. Lot of flying through the air in this fight.

Both are clearly more tired at this point, especially Freddy. Ronny Yu helps to signal that it’s the final round by making heavy use of slow motion and some more melodramatic music. Jason starts laying into Krueger pretty good at first, cutting him across the chest several times, until the Springwood Slasher slices Jason’s fingers off just as he’s goes in for the kill. Freddy seizes Jason’s machete with his ungloved hand and delivers some serious payback, with a bunch of hacking blows that send him to the ground. Again, this isn’t something that should do more than just piss Jason off. In a really gross move, he gouges out Jason’s eyes right through the hockey mask’s eye sockets. Ouch.

Should have used the Three Stooges defense

This is when those meddling kids interfere by spraying the dock with gasoline (there’s a gasoline hose nearby. You know how to react) and lighting it afire– ain’t nobody got time fer dat. Jason uses the distraction to punch one stub-fingered arm right into Freddy’s guts and rip his arm off, then Freddy retaliates by machete-ing Jason right in the chest. Both get blown right into the lake when the flames reach a nearby gasoline tank and make a fireball out of the whole thing.

The kids think they’re safe, but they should know the first kill NEVER takes with these guys, because a machete-wielding figure slowly stalks up to them. Yu shoots it cleverly to not give away which of the two villains it is, before pulling up to reveal that it’s Freddy, still wielding his opponent’s weapon. But just as he raises it to make some teen-kababs, he gets stabbed in the back and right on through his chest by his own claw… still attached to his own arm. An exhausted Jason drops the limb and falls back into the lake. Lori takes this moment to say a really lame one-liner and decapitates Freddy.

But that’s still not the end, because after they leave, we return to the lake in the morning, and in dramatic slow-mo, Jason Voorhees rises triumphantly from the water, machete in one hand… and Freddy’s severed head in the other. Last man standing, bitches!

Until we zoom in on Krueger’s head, and… oh no….

I can’t really convey how hilarious it is. Perfectly timed.

A mighty mixed bag. There are a few really awesome parts, especially the beginning and ending, with many tedious or annoying parts. Jason & Freddy are two very different kinds of monster, and unfortunately the way the filmmakers tried to square that circle was to turn Jason into the chump. Similarly, the whole oxygen missiles/construction yard derby part is really convoluted in execution, even if it was inventive in concept.

The fight does cover a lot of ground with a couple daring change-ups. And it certainly doesn’t cheap on time: even subtracting the cut-aways to annoying humans, this fight still lasts in the neighborhood of around ten whole minutes. That’s impressive all on its own. And the ending, with Jason walking away in (mostly) one piece and Freddy’s wink, actually finds a way for the movie to have its cake and eat it too: giving one character a real “victory” rather than a “they both lose” cop-out but still not completely ruling Freddy out.

Grade: B-. Or an A if you’re seeing it at midnight with a bunch of drunken pals.