In which the Rock enters a wretched hive of scum and villainy.

The Setup: After returning pissed off from his last job, Beck demanded a mission with a payday big enough to wipe his slate clean. The mission is to “retrieve” his employer’s wayward son, Travis Walker (Seann William Scott), back home to daddy. The trouble is that Travis is putzing about in a remote mining town out in the Brazilian jungle.

The mine, and the town, are run with an iron fist by the eccentric villain Cornelius Hatcher (Christopher Walken, whose only performance notes from Peter Berg seem to have been “Chris, just do your thing,” because that’s exactly what he does). Hatcher and his small army of minions work the local populace basically as slaves, and although Hatcher initially allows (for a rather hefty sum) Beck the privilege of retrieving Travis, he later reneges when he learns that Travis has tracked down the location of a valuable jungle artifact, the Gato do Diablo.

Beck finds Travis easily enough in the local dive bar on a hot afternoon, where Travis had been conspiring with crafty bartender Mariana (Rosario Dawson, who hadn’t quite hit it big at this time). Beck gives Travis the old A&B choice, and although Travis predictably resists, Beck restrains him with minimal difficulty. That’s when Hatcher walks in with four goons (Swenson rather cannily enters through the back door, surrounding Beck) and announces that he had his “fingers crossed the whole time” on their recent deal, so Beck’s going to have to turn Travis over after all– no refunds. This will not go well.

The Fight: Beck is cool as ever, but given that two of Hatcher’s guys have guns drawn, he has to think creatively. First he trips Travis and sends him painfully to the ground, taking him out of the action. He throws a chair (wrestlers and their chairs, man) at Harvey and the two men near him– they’re foolishly clustered together– and escapes behind a pool table in the confusion. He takes cover as they fire off some rounds, then rushes with surprising speed when they get closer. Beck leaps and takes the first jabroni out with a nifty if gratuitously complicated flying corkscrew move with his legs, then immediately after landing he sweep kicks the other gun-wielding goon. 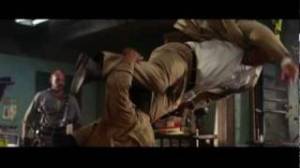 Swenson stands by passively in the background, wondering when the next Castlevania game will come out.

Having found time to disarm the two thugs during his amazing acrobatics, Beck then dismantles the knife-toting Harvey, and shoves one pilfered gun in the chump’s mouth while aiming the other at a rather impressed Hatcher.

Swenson should totally have this guy’s job.

Not wanting to cross the line into killing, Beck falls to the ground so he can double-kick Harvey into his two buddies and knock them down (again) like bowling pins. He sees Travis making a break for it and, with mathematical precision, releases the magazine from one pistol and slides it under Travis’ feet, tripping him. Dropping the other gun in an attempt to defuse the situation instead makes Beck vulnerable to Swenson’s whip, which the bad guy unfurls in a dramatically cool slow-mo shot.

But even whips are no match for the Rock, as he demonstrates when he catches Swenson’s initial strike, holding the end tight. By the time Swenson readies his other whip Beck has thrown a small wooden table his way, intercepting the blow so Beck can escape with Travis while the dust clears. To be continued, Mr. Hatcher.

Fun stuff here, even if some of the choreography is perhaps a little too silly for its own good. Though it’s a bit more creative in its staging, at heart this scene is really not much different than what the previous fight was: an abbreviated little scuffle to show what Beck is capable of. So at the end of the day it’s hard to be impressed with it much more. Of course, it’s hard to dislike it, too; more action movies should be this playful. 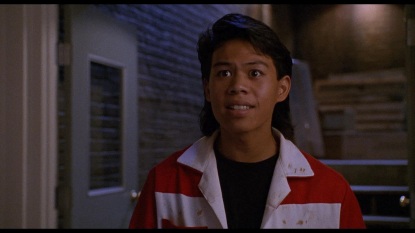