All are armed with rapiers or sabers. Some of the soldiers have single-shot rifles that prove useless against the speedy fox, and Captain Love carries a pistol but he is immediately deprived of it.

The Setup: Alejandro has just returned from an extended undercover mission, impersonating a young nobleman in order to get in Montero’s good graces and find out his plan: he plans to buy California from Santa Anna, using gold from a secret Mexican mine run by slave labor. Though his performance was impeccable, Alejandro still had to suffer through a few tense confrontations with the man who hunted down his brother: Captain Love, an amoral mercenary with the face of a date rapist:

His mercenary business’ slogan: “Money CAN buy you Love!”

Frustrated at having had to restrain his bloodlust, Alejandro is encouraged by Diego to hide his rage behind the mask of Zorro. On the eve of the would-be California Purchase, the determined hero sneaks into Montero’s home to abscond with the map to his hidden mine. Meanwhile, Diego, in a distant but visible field, puts the fear of God into the villains with some not-so-subtle imagery:

After effortlessly stealing the map, Zorro surprises Love in a hallway. Holding him at sword-point, he deprives Love of his weapons, and when two guards approach, he holds their captain hostage and forces them to let him kick them out the window. He doesn’t want to deal with them; all he needs is Love. Once they’re alone, Zorro steps back and returns the captain’s sword so that they can duel, and he can give Love a bad name.

This Love has taken its toll on the hero, so he clearly relishes the opportunity to defeat and embarrass him. They start out tentatively at first, with Zorro almost teasing the villain with tiny little gestures. But soon the fight begins in earnest and it’s wonderful to behold. Love, being a many-splendored fighter, is quite good, but the power of Love is no match for Zorro. The hero easily dominates the captain and finally sends him sprawling to the ground with a brutal punch. But before Zorro can finish the job and become a murderer of Love, our old pal Don Rafael comes rushing out to the hallway, ready to fight.

Even though the apparent return of his old bete noir surely rattled Montero’s nerves, he hasn’t missed a step in the fencing department, putting up a worthy fight for Zorro.

“Rafael, without your Love, you are nothing!”

Things get even trickier when we’re reminded that despite a good decking Love is all around, and the captain rejoins the fray. Even outnumbered Zorro is still deadly, picking up a second sword and driving his opponents back. That’s a bad long-term strategy, though, so the fox escapes from the hallway and out into a larger courtyard/foyer area, pursued by his two adversaries and with yet more soldiers streaming in.

It gets even more fun from there. Zorro outfences and outmaneuvers the faceless goons even more easily than he did the main villains (who also join the battle). Even more before, Alejandro is always in motion, always in control, always too cool for school. If he’s ever anxious at all during the fight, he doesn’t show it; on the contrary, the look on his face betrays that this new hero is having the time of his life. Swashbuckling hasn’t looked this good since Errol’s days.

The fight is packed with all sorts of delightful incident. Zorro controls the terrain by jumping off & on a large table and bringing the fight up there, he clocks Love again after being momentarily disarmed, he duels Montero from the other side of a huge candle stand, he does Olympic-level gymnastics on a series of tree branches. It’s not until the fight’s end that he’s even briefly put out, when he’s literally up against the wall with all the surviving soldiers ready to close in. 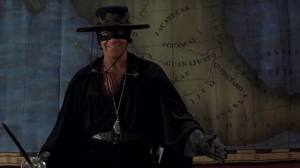 But just as they charge, Zorro sidesteps from the wall and cuts loose the enormous hanging map behind him so that it falls on top of his pursuers, leaving them in a state of confused chaos so he can escape with the goods. (There’s bit of poor staging here: Banderas steps away from his foes a few seconds too early, and the careful viewer can see the soldiers would have had ample time to stop or change course on their blind charge. Ah, well.)

Zorro is quite rightfully pleased with himself, but he doesn’t see that his escape has been witnessed by Rafael’s “daughter,” Elena….

Except for the most minor of errors, very little not to love here. The choreography is fantastic, James Horner’s music soars, Banderas’ devilish charm dazzles, and the pacing is perfect– like many of the great fight scenes, it goes on long enough that you don’t feel cheated but short enough that want more. Plus there’s some excellent comic timing at work in the moments before the fight, as Zorro dispatches of Love’s would-be rescuers. If you’re not cheering for the movie now, you’re in a coma.

Recommended Links: Antonio Banderas hung on to his sword prop from this movie, and once used it to scare off a burglar. It’s not quite as cool as burglars being scared off by the very IDEA of Dolph Lundgren, but still.

And here I am, fresh out of “love” puns.