The Incredibles is my favorite Pixar movie. This is not a title I bestow lightly.

Released in 2004 and directed by nerd hero Brad Bird (The Iron Giant, Ratatouille, the Mission Impossible movie where Tom Cruise is framed by bad guys and has to go rogue from his own organization– no, the other movie where he does that. No, the OTHER other one), The Incredibles is a joyful celebration of old school superheroics. It manages the strange feat of being deeply nerdy about its comic book inspirations but not self-consciously so; smart comic fans will spot the story’s roots in everything from the Fantastic Four to Watchmen but the movie never disappears up in its own butt with overtly winking geek references. It’s also surprisingly Randian but we’ll not get into that. Instead we’ll get into….

The Setup: Fed up with hiding his true nature, Bob Parr is an easy mark for a weapons contractor who tracks him down & hires him to stop his “malfunctioning” Omnidroid. In time it will be revealed that this employment offer is actually a trap for Mr. Incredible: the robot’s owners have programmed it to kill him or, failing that, observe enough from its defeat in order to be made even stronger in its next iteration. But for now Bob, uncomfortably squeezed into his old outfit, goes along with the fake story, gets dropped on the lush jungle island of Nomanisan (get it?) and gets to tracking down his foe.

The Fight: Even at his prime Mr. Incredible was hardly the Dark Knight Detective so he spends a good deal of time searching aimlessly for the giant machine, and he stumbles onto the telltale signs of Omnidroid mere seconds before it arrives and attacks. Despite his girth, Bob’s uncanny agility is still intact, and each swipe from the robo-beast’s grasping tentacles is a near-miss. This isn’t a slugfest; the one good punch Incredible gets in on Omnidroid launches it far backward but it’s not much worse for wear when it lands.

A lot of fun stuff happens from here on. When Parr tries to vault over the approaching robot, it calculates (we keep getting brief views from Omnidroid’s internal HUD) the trajectory of his leap and swats him out of the air effortlessly. At one point it fully retracts all its metal limbs and rolls into a ball, chasing after Mr. Incredible in a way that would probably trigger Indiana Jones’ PTSD if he were watching. That also leads to a chase down a cliff side and Omnidroid hurling rocks at a distant Bob; there’s a kind of hypnotic grace to the fluid movements of the machine’s arms.

The fight gets a lot more serious when it moves into a nearby volcano and Bob finds himself with his back against a lake of lava. The superhero is able to jiu jitsu his grasping enemy into the lava and seemingly cut the fight short– he even enjoys some gloating victory laughs which throw out his already over-stressed back. Unfortunately the machine is apparently capable of withstanding even the most extreme of temperatures and it rises from the liquid hot magma looking rather ticked.

Omnidroid even demonstrates a new technique, holding two of its arms stretched out directly in front of it and spinning the claws into whirling propellers of death. Parr escapes getting pureed by jumping out of range but the machine still seizes and slams him to the ground (should have just dropped him into the lava, silly robot), but when it tries to finish him off by ripping him in half lengthwise, the pulling motion inadvertently repairs his back– instant chiropractor!– and gives him the burst of energy he needed to escape.

Mr. Incredible opts to use the big muscle in his head for once, and in the confusion he immediately gets directly underneath the robot– while Omnidroid has sensor cameras on both its top and bottom, they don’t have a full 360 degree view, and Bob exploits the blind spot. He then rips off the bottom sensor and climbs inside the machine. As it tries futilely to get at him, Omnidroid pokes several holes in itself, and finally Bob lures it into stabbing directly into its own power core. It sinks to the ground, inert.

Though there was all sorts of spiffy superhero antics in the movie’s delightful opening prologue, this is where The Incredibles really starts to flex its action muscles, and I’m very pleased with how it delivers. The fight’s staging covers quite a bit of ground, from a dense green jungle to rocky cliff to the inside of a volcano (shouldn’t being this close to the lava be too hot for Bob, even in his suit? And shouldn’t it take longer for Omnidroid to cool off after emerging from the lava? That stuff’s like a thousand degrees). Michael Giacchino’s masterful score is appropriately menacing in the early part of the fight, but quickly turns triumphant (the movie bucks expectations with deliberately retro music motifs that sound more appropriate to a 60s spy show than a modern superhero flick) when it’s clear that Bob is going to turn the tables.

Speaking of appropriately menacing, Bird does an excellent job of selling the threat presented by the Omnidroid. Mr. Incredible gets by with some clever moves and his fair share of luck, but after seeing that metal beast in action there’s no question the fight could just as easily have gone the other way. This is important because our pal Omni is going to come back in a big way.

Strange to think that this movie’s nearly ten years old. Superhero films have come a long way since then, but few have rivaled this shining gem. This fight that closes out the first act serves as a strong opening statement as to what the master storytellers at Pixar could do on the genre’s canvas. And it will get even better.

Coming Attractions: Dash runs away with our hearts. 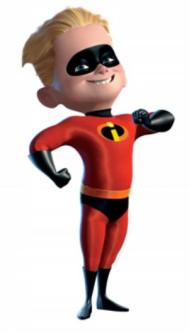 No, he can be cocky. He earned it.