Going old school for this one.

The Quiet Man! One of masterpiece-factory John Ford’s many great hits, and a labor of love for all involved. If you’re the kind of youngling whose idea of “classic” movies doesn’t get much older than The Goonies, you might remember it as the film playing on TV that E.T. watches during a kissing scene and telepathically inspires Elliot to act out.

If you haven’t seen it, walk away from your browsing device right now and go watch it. Not just because I’m going to spoil the crap out of it, but because it’s wonderful. You do yourself a disservice by not seeing this film.

1) Sean Thornton vs Will Danagher

The Setup: The setup to this fight is basically the whole plot of the film, so bear with me. In order to deal with the tragedy he inflicted, Thornton has returned to his family’s ancestral home in the tiny, traditional town of Innisfree. There he rather understandably falls in love with tempestuous redhead spinster Mary Kate Danagher (Maureen O’Hara, doing what she did best), but clashes with her brother, Will.

[The film couldn’t get made today, and not just in the “eh they don’t make ’em like they used ta!” sense. An outsider arrives at an isolated European community where his straightforward ideas clash with their funny old traditions and the lesson is that he has to adapt to them? Unthinkable! This movie is the reverse-Chocolat.

Many professional feminists would howl about the gender roles, dowry, etc., though if they really paid attention they would notice that it’s the woman who ultimately controls the outcome of the film’s greatest struggle; she successfully persuades her man to change, not the other way around.]

Mostly through the machinations of the friendly townsfolk, William does begrudgingly allow Sean to court and eventually marry his sister, but due to some complications and pride, William ends up starting a fuss at the reception and doesn’t give Mary Kate the traditional dowry (he’s even meaner to his other sister, Ashley).

Though they talk around it endlessly, Sean, a practical American who already has enough money for both of them, can’t see the point of his new wife’s obsession with her mere pittance of a dowry. He doesn’t get that she wants the money not for its value but because it’s hers, and her brother’s refusal to relinquish it is a wound to her pride– a wound she expects her husband to avenge. This is further stymied by Sean’s dark secret (only one other person in the town knows about his boxing past, and, you know, I rather think “I beat a man to death one time” is something you’d tell your wife about at some point), as he is hesitant to use violence again. All this causes a rift in their marriage, just as it’s starting.

When the shame becomes unbearable for Mary Kate, she flees (or at least makes a pretense of fleeing) town, and boards a train at the station not too far away. This is the last straw for Thornton, and he’s finally ready to show the wife who’s boss. She’s the boss, of course, but that doesn’t mean she doesn’t like a little backbone in her man. Sean demonstrates his newfound sense of purpose & determination by showing up at the station mad as hell, forcibly hauling Mary Kate off the train, and dragging her all the way back to Innisfree. And by dragging, I mean he literally drags her, by the wrist. On foot. Across the Irish countryside. For FIVE MILES. It’s played for laughs, and against all reason, it works. It is the most glorious, hilarious domestic dispute you’ll ever see. Even if you’ve seen The Ref. 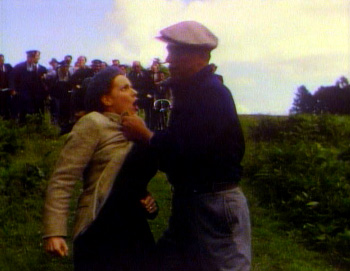 “How DARE you do this awesome thing to me!”

Their destination is Danagher farm, where Sean confronts Will and issues the ultimatum he never wanted: give me the dowry or take back your crazy sister. In view of pretty much the entire town (they’ve all been following the family drama and have been spectators to the cross-country abduction for quite some time), Will reluctantly agrees and hands over the money. Sean immediately tosses the cash in a nearby incinerator, with Mary Kate’s gleeful assistance: it was never about the money, it was about her independence and having a husband who stood up for her (not to mention TO her). Will’s had enough of Sean humiliating him and throws a wild roundhouse, which Sean ducks and counters with a punch in Danagher’s sizable gut. Now, the fight the whole town (and the whole audience) has been eagerly awaiting begins!

[Incidentally, Mary Kate leaves at this point, telling Sean that supper will be waiting for him at home. She doesn’t need to see the outcome, because she got what she wanted.]

The Fight: They punch.

They punch some more.

Pictured: approximately 1/3200th of the punches dispensed that day.

Oh, I’m overselling the simplicity of it, I suppose (and, simultaneously, underselling just how well the simplicity works). Before the fight goes too far it ends up turning into a crazy free-for-all involving the whole village, but one of the craftier townsmen gets everyone’s attention with a few gunshots and tells them all to calm down so they can focus on the main event. Although both sides agree to “Marquis of Queensbury rules” this is immediately followed up with by a kick to Sean’s face, and they get back to business.

It doesn’t just keep going, it keeps moving. The two brawlers take their bare-knuckled exploits all over the countryside: out of the Danagher farm, through the hills, into a river, into the town proper, into the pub, etc. The whole town of onlookers moves along with them, gawking & cheering as a weird sort of living, mobile boxing ring. Ford stages the entire event so masterfully that these traveling fisticuffs never feel forced or unnatural, yet you simultaneously grasp & appreciate the absolutely bonkers nature of what’s going on here.

And what a happy kind of bonkers it is. The music is upbeat, the crowd cheers, and, bizarrely, this is the point in the movie when Thornton and Danagher are the least antagonistic towards each other. In sheer brute force and gleeful mayhem, they’ve forged a connection they could never make in their normal lives. What could be more manly than that?

In fact, the fight takes a breather as it travels in front of the local pub, and the two pugilists agree to break for a drink. As they toast & imbibe, they mutter some trash talk but also express sincere admiration for each other. Until, of course, it comes time to decide who’s going to pay– the argument leads to a beer in the Duke’s face, and a retaliatory punch that sends Will flying through the wall into the street.

The screen then fades to black, and when it cuts back, the sun is setting, Will & Sean are drunkenly ambling back to the Thornton house, arm in arm and singing. It’s a great transition, but if I had any major quibble with this fight, it would be that it ends too abruptly. It’s not completely clear if Sean’s haymaker in the bar is what officially ended the fight or if it continued for a while after. Either way I think it could have stood to linger for a bit longer. And if I had a minor quibble, it would be that Will doesn’t come across too well in the fight; he receives the majority of the hits and almost all the blows he does land are sucker-punches. But, ah well.

As inventive as the traveling nature of the fight is, the actual choreography here is not too complicated, aside from a few neat stunts like Danagher getting decked into a stream. That’s something of a product of the times, however, and not a knock. Besides, this isn’t about complex stunts and brutal beatdowns; this is about standing up for yourself and earning respect. It’s the culmination of an entire movie’s worth of buildup and simmering conflict (remember, this is not an action movie; it’s a comedy-drama-romance with one huge fight at the end). It’s about male bonding, Irish style.

You might say, “Hey, how can you grade this so high when you’ve been harsh before on scenes that work well thematically/narratively but are kind of weak as far as the actual fighting?” Well, I don’t know what to tell you, aside from asking why it’s so important for you to keep a silly movie blogger from being hypocritical (you weirdo). I just know that this fight is joyous, in every frame. It is a beautiful thing in a beautiful movie and we should be honored to have it.

No, I said the RED pill, pervert.

4 comments on “The Quiet Man”