Well it took about 5/6ths of a 2 hour+ movie, but Michael Bay was able to deliver some goods.

The Setup: The heroes have the Allspark MacGuffin, but chief bad guy Megatron has been awakened and rallied all Decepticons on planet in pursuit. Bonecrusher seems to have gotten there first, and switches to robot form right there on a crowded freeway and starts smashing up civilian cars in his path. Optimus is having none of that, because “not getting crushed by a huge alien while driving to work” is the right of all sentient beings.

The Fight: Bonecrusher gets the first move with a running tackle that sends them both plummeting off road onto another freeway below. Once they both get up Optimus takes control of the fight and slow-mo uppercuts (you can see Bonecrusher’s eye rattle as the punch connects) the Decepticon so hard he falls down even further, onto the car-free underpass. The Decepticon rallies and is still down to fight, but Prime makes a canny use of a support pillar as cover– he dodges Bonecrusher’s lunging “tail” and quietly unsheathes his blade. When the villain moves in from the other side, Optimus is ready to slash him, then grabs him in a headlock and jams the energy sword through Bonecrusher’s skull. Vertically. 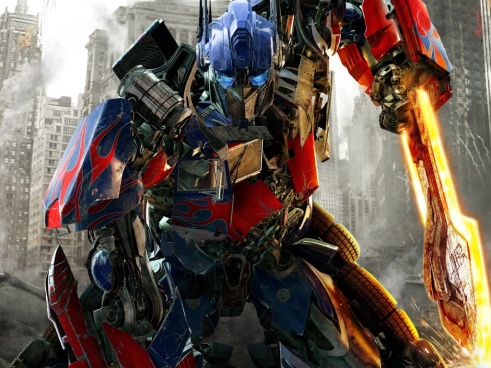 On one level, this is not much of a fight; it actually lasts slightly shorter than what we saw of the previous confrontation. But oh, what a difference a few details make.

First of all, it’s short but we see all of it. There is only the briefest of cutaways to some puny humans: a nearby child shouts “cool, Mommy!” which is mildly irritating at worst; I mean, it’s not like he’s incorrect, and it more complements the flow of the action rather than breaks it up. The brevity is also a function of the nature of this skirmish, its purpose in the plot being to establish Optimus’ toughness, as well as how this film’s version differs from the Prime most 80s kids knew– in addition to being inspiring and courageous, he’s also a ruthlessly efficient killer. Therefore, it’s less of a fight and more of a beatdown. Note that a second plot purpose has been served because between the short fight and the two-story drop, Optimus is separated from his companions, and will thus be making a fashionably late entrance to the climactic throwdown.

Speaking of that two-story drop, it plays very well on-screen and really helps sell the scope of the battle/the power of the combatants. The scene is shot in broad daylight, so all the details of the multi-level battle are perfectly clear, and while the steady concussion of Steve Jablonsky’s musical score is a bit generic, it serves the action nicely.

More would have been nicer, but more will come soon enough, and the improvement is much appreciated.

Recommended Links: For such a powerful character, Optimus Prime sure does die a lot.

Coming Attractions: The final battle (for this movie anyway) ensues. One shall stand, one shall fall, and one irritating human shall get to do the honors for some reason.

You’ll always be my Megatron, Frank.